The store will not work correctly in the case when cookies are disabled.

The all-round Leofoto LN-284CT Armour carbon tripod including NB-40 ball head is part of the Leofoto Amour series of tripods. This is a classic carbon tripod with a fully adjustable ball head and a maximum load capacity of 15 kilograms. One of the tripod legs is detachable and can be used as a separate monopod. The Leofoto LN-284CT with NB-40 has a removable center column and is relatively lightweight. 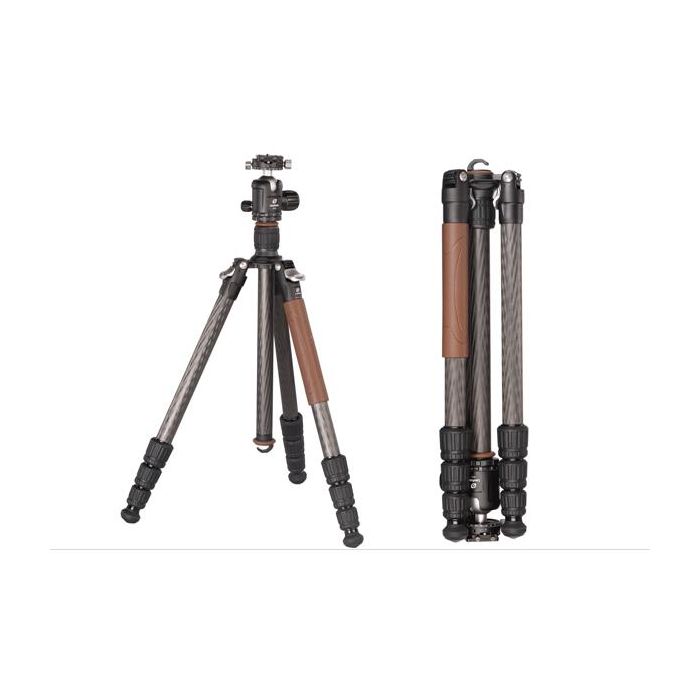 Skip to the beginning of the images gallery
Details

The all-round Leofoto LN-284CT Armour carbon tripod including NB-40 ball head is part of the Leofoto Amour series of tripods. This is a classic carbon tripod with a fully adjustable ball head and a maximum load capacity of 15 kilograms. One of the tripod legs is detachable and can be used as a separate monopod. The Leofoto LN-284CT with NB-40 has a removable center column and is relatively lightweight.

Carbon tripods are perfectly capable of absorbing vibrations. In addition, they are comparatively very light and at the same time extremely strong. The Leofoto LN-284CT carbon tripod is no exception. It is made of 10 layers of cross-woven and reinforced carbon, which ensures you of a very strong but at the same time light tripod. The maximum working height is 169 centimeters and if you flip the center column the minimum working height is 21.5 cm. The Leofoto LN-284CT including NB-40 ball head measures 50.5 centimeters when folded, so the entire tripod easily fits into a suitcase. The load capacity of the Leofoto LN-284CT tripod is 15 kilograms, while its weight is only 2.27 kilograms, including ball head. A true all-round tripod for regular use.

The robust carbon tripod legs of the LN-284CT consist of four smoothly extending sections with a leg diameter of up to 28mm. These tripod legs have a screw lock or twist lock. This means that with a simple movement of the locking screws, you can easily turn the legs loose and tight, even with one hand. You can also unscrew one of the tripod legs and use it separately as a monopod. Then the NB-40 ballhead can also be mounted again, because the leg has a 3/8-inch thread. To prevent cold hands, Leofoto has provided this tripod leg with a silica coating. The tripod legs all have removable, shock-absorbing rubber feet for a stable grip on any surface. Should conditions make it necessary, these are also easy to swap out for the included stainless steel spikes.

The included Leofoto NB-40 ball head has a built-in level on the quick coupler. Thanks to the professional Arca-Swiss quick-release plate with anti-slip rubbers, you can quickly put your camera on this tripod head. Using the control knobs you control the horizontal adjustment of the entire head, which can rotate 360 degrees. In addition, the quick coupling can also rotate 360 degrees, useful if you want to use a fixed ball but still want to tilt your camera. The degree scale on both the tripod plate and the quick release makes this ball head very precisely adjustable. The NB-40's ball can tilt 90 degrees for vertical shots, and the friction is separately adjustable with a large dial. The ball head has a 1/4-inch tripod screw and a 3/8-inch thread on the bottom, and can be unscrewed for use on the detachable monopod. If you're using the ballhead on another tripod, it's worth noting that the NB-40 can support as much as 16 pounds of weight.

The tiltable legs of this carbon tripod allow you to work very low to the ground, but if you turn over the removable center column, you can work very close to your subject for macro photography, for example. That center column is quickly and smoothly adjusted by the twist lock on the tripod body. Due to the relatively low weight of a carbon tripod, a counterweight is often necessary for stable working. Especially for this purpose, a detachable hook is attached at the bottom of the center column of the Leofoto LN-284CT. You can hang a camera bag from this hook, but also a bag of stones, for example. The Leofoto LN-284CT carbon tripod comes with the NB-40 ball head, an Arca-Swiss quick release plate, a set of spikes, a multitool and a strong carrying bag.